What is AngularJS? What are its Benefits?

Home • Blog • What is AngularJS? What are its Benefits?

What is AngularJS? What are its Benefits?

AngularJS is a JavaScript framework designed to create single-page web applications. Since there is still some confusion associated with the definition of these words, it is worthwhile to clarify. First of all, as already mentioned, AngularJS is a framework. The framework implies that instead of writing all the code, the developers themselves “play according to the pre-agreed rules”. These rules are the standards and tools of the selected framework.

AngularJS comes with many tools which make things easier for programmers. However, it is the developer’s task to know how to use these tools. The set of Angular tools includes filters, directives, two-way data binding, and many more.

We use AngularJS to build single-page web applications and websites. Thus, the browser will initially open only one page and additional content will be loaded as needed. With this approach, traffic is saved and the server load is reduced.

How beneficial is Angular.JS?

Why you choose Angular JS

The main aspect of the development of a web browser is an approach taken. A competent approach in managing the existing mechanisms and structural elements help save a lot of time and create convenient user interfaces in a short period of time. To date, there is a number of significant reasons which determine the relevance of AngularJS application for modern works on creating browsers.

With built-in updates to the internal elements of AngularJS, the developer receives summary information without the need for a thorough preliminary check. The relationship between the design components and a data output for the user is one of the main supporting features of AngularJS.

Development work begins with the installation of the system file angularJS. Required elements and built-in modules can be run as needed during the process of working with the application.

Angular.js does not function on the basis of JavaScript elements combined with the DOM library, but with the use of new standards for writing HTML attributes. Thus, logical separation is achieved between reproducible content and the semantic load of the application. Such an application of less labour-intensive solutions will not only increase the efficiency of creating applications but also perform the required tasks with increased productivity.

Differentiation of software and design

The work on creating a web service is based on the interaction of programmers and designers, however, the concept of Angular JS defines a new approach that allows you to think through and refine the subtleties of content while the developer constructs the logic of the future application. This mechanism is based on {{param}} variables.

Today, single-page applications and websites are in demand because they create the impression of interaction with standard programs that the user is used to. With AngularJS, you can transfer the main functionality to the browser without the need to install additional software, which facilitates and speeds up the work of the developer. In addition, this feature will allow you to easily create hybrid mobile applications.

AngularJS does not have a rigid structure, but it has a certain number of modules for routing, such as UI-router or ng-table, UI-grid, through which work with tables and graphic elements is simplified. In this case, the feature of these modules is complete mobility and independence, that is, the components can function independently from each other. For example, such an advantage includes the Facebook login module, which can be applied simultaneously on different pages: when placing an order or on the start page. 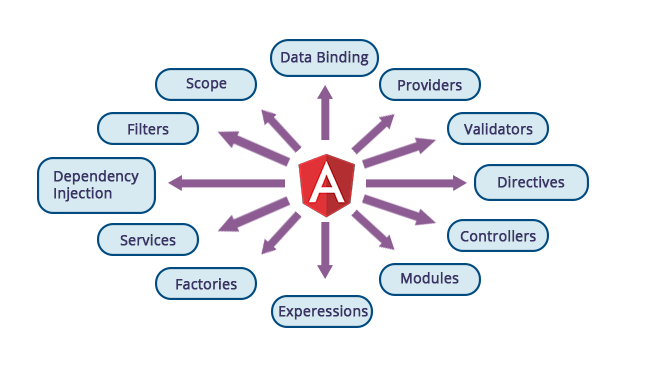 AngularJS is a useful framework for creating web pages because it has a number of forms that allow you to optimize the work of the developer. Error handling is performed using built-in validators (ng-minlength, required, ng-required, ng-pattern, etc.), while the user can create individual forms and apply them for individual fields or for the entire project. The built-in Form Controller captures the status of existing forms, after which, using the information received, the developer can adjust the HTML elements by translating them into the UI. In addition, for formatting and making changes there are special filters through which you can enter data into templates and display them on a dynamic page.

Angular JS provides the opportunity to engage in the development of the project with a group of programmers since the modular concept allows you to disassemble the project into elements and combine them in the desired sequence. In addition, each of the modules is applicable to other projects.

Demand and popularity of AngularJS

To Sum up, I would like to note that due to the autonomy of the constituent modules, it is much easier to load elements and perform testing in automatic mode, and this eliminates the need to memorize the order of the files being processed. Thus, Angular JS is an optimal framework by which convenient single-page type web applications are created for both developers and potential users.

If you want to use AngularJS for your project, I would recommend you to consult F5 STUDIO project managers to get detailed information before you make a decision. Also you can hire F5 STUDIO front-end developer who has an experience in AngularJS.

In the world of computer science, there are many programming languages, and no single language is superior to another. In other words, each language is ...

Press releases play a crucial role in ensuring a successful content and digital marketing strategy. However, they require a different writing approach ...

Why Vue.js the right application development framework for your next project?

Vue.js is undoubtedly the best progressive JavaScript framework that helps build user interfaces while designing an app. It is a flexible technology that ...

Understanding and improving the bounce rate

Every Internet marketer hates bounces and every site owner wants to reduce a bounce rate. Many people think that a bounce rate affect ranking a website. ...

During the last few years there has seen the growing demand for mobile interfaces that have poor compatibility with desktop versions. The hidden ...

How to Improve SEO Ranking

Are you willing to understand how Search Engine Optimization can help your business or startup? Well, you will get to know interesting practices about ...

JavaScript is one of the most preferred programming languages for the website development because of its versatility, simplicity, and effectiveness in ...

Web technologies every web developer must be aware of in 2020

Gain New Heights for Your Business with WordPress Website SEO

In the race of content management systems, WordPress, which started as a blogging platform, has made it huge with almost 50% of the market share and ...

With many business ideas getting pitched every day and new companies springing up every now and then, it is very important to carry out excellent ...

How to get honest feedback for your Web Design

It can be challenging to provide feedback to your designer regarding your new website. You may not know whether to use lingo or what it sounds like. Take ...

Bootstrap 5: Information about the new version

Bootstrap is generally well-known to every web developer and widely used open-source framework for web development with HTML, CSS, and JS. The Bootstrap ...

Have been attempting to create the website for business? If yes, then you should look at some of the facts which were collected by F5 Studio web ...

Essential and Important tips for content management and SEO for WordPress

WordPress was first created as a platform for blogging but throughout the years it developed and evolved as a fruitful content management system. It has ...

Though WordPress promises smooth functioning, you can never be sure enough with instances when your site is likely to throw an error. However, WordPress ...

How to choose right budget for an e-commerce site

E-commerce platforms have recorded great popularity in growth over the last decade. With this increasing pace, online sale is expected to jump only ...